How it Works from Amerex Corporation on Vimeo.

Amerex offers two systems to meet the industry’s varying needs. With the Amerex KP Restaurant Fire Suppression System you get appliance-specific coverage that typically offers lower initial cost. The KP system is ideal for uses where appliance location is fixed such as in fast food chains, casual dining, cruise ships and school cafeterias. 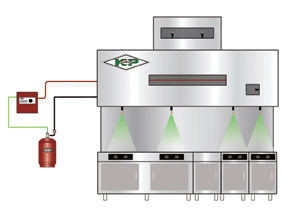 The Amerex ZD Restaurant Fire Suppression System adds greater flexibility by letting you reconfigure a kitchen or move appliances without moving nozzles. Because of its adaptability, this system is the most cost effective choice over the life of the system. The ZD system was designed with fine dining, culinary schools, military facilities, hotels and hospitals in mind. 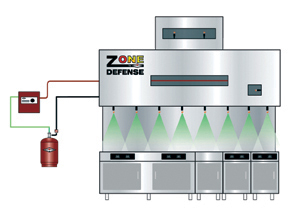 The system agent is Amerex KP liquid fire suppressant, a potassium acetate based solution that suppresses cooking grease fires through both saponification and cooling. The agent has a pH of 9 or less and will not harm stainless steel surfaces under normal conditions.

The mechanical release module is the spring-loaded type using a mechanical input and electrical, mechanical or pneumatic outputs. It is capable of actuating from one to ten agent cylinder/valve assemblies using one nitrogen cylinder and is operated either automatically by the detection network or manually by a remote manual pull station. The MRM enclosure, available in either stainless steel or red painted steel, has a system status indicator and a window to observe the nitrogen cylinder pressure. The enclosure has provisions for applying tamper seals after final testing or periodic maintenance. The MRM enclosure has knockouts on three sides (top, bottom & right) to accept conduit. The MRM has two SPDT micro switches pre-installed.

The PRM offers superior detection by using a linear pneumatic detection system. The PRM detection system consists of the PRM, thermal responsive tubing and end of line fitting. The tubing is pressurized through a small “accumulator” inside the enclosure, routed throughout the hazard area. When exposed to a fire condition, the tubing ruptures, relieving all of the pressure in the tubing and accumulator thus firing the system using a nitrogen cylinder. The PRM comes complete with enclosure, accumulator, end of line fitting, and connector for up to two remote mechanical manual pull stations, two SPDT micro switch, and “knock-outs”. It is capable of firing up to 10 – agent cylinder assemblies and actuating up to two gas valves. The tubing is sold separately and is cut to length. Stainless or red enclosure.

The actuation cylinder is filled with 10 cu. in. of nitrogen and has an integral pressure gauge that allows easy field verification of pressure. This cylinder shall be capable of being refilled in the field by an Authorized Amerex Zone Defense Systems Distributor and shall not require periodic hydrostatic testing.

Discharge nozzles are made of chrome-plated brass, and shall consist of a one piece tip/body, strainer and blow off cap.

Agent discharge piping for the Zone Defense system shall consist of nozzles placed no further apart than 20 inches the entire length of the hood creating an overlapping nozzle spray pattern which permits movement of the protected appliances such as fryers, woks, ranges and char-broilers, without altering the Zone Defense discharge nozzle locations. Specific appliance coverage can be used where necessary.

The manual pull stations are a “dual action” type. Both a ring pin and lever must be pulled in order to discharge the system manually.

A mechanical gas valve, specifically listed by UL for use with the Amerex Zone Defense system, shall be installed for automatic shut off of gas whenever gas appliances are used. The valve has a “pull to close” design requiring a pull force to trip a latch that holds the valve in the open position. The cover of the gas valve has a visual indicator showing the valve’s state of readiness. The Amerex mechanical gas valve body is made of brass and is UL Listed for both natural gas and propane. Existing mechanical valves, if operating, may be used according to the listed Zone Defense Design, Installation, Maintenance and Recharge Manual.

If an electrically operated gas valve is required, it must be UL Listed for use with the Amerex Zone Defense system. The use of a UL listed manual reset relay is mandatory to prevent unmonitored gas flow due to power outage. A micro switch mounted in the PRM is used to control the closing of the gas valve at the moment of system actuation.

UL listed electric micro switches are provided to accomplish system output functions. The switches are “stackable” inside the PRM without requiring extra mounting hardware. From one to four sets of dry form “C” contacts are available. 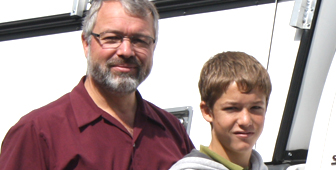 My name is Allen Yoder. My son, Conrad and our team at Holmes Fire and Safety are happy to help protect your business and family from fire hazards. More about us.

Send us a message and tell us about your fire protection needs or any questions you may have.

Holmes Fire and Safety is delighted to offer the Amerex brand line of products.

Beginning in 1971, Amerex Corporation has grown to become the world’s largest...
[Read more.]

Holmes Fire and Safety Solutions is a family-owned business and has been serving the Holmes County area since 1973.

It was founded by the former Fire Chief Paul Yoder of Berlin upon the encouragement...

Get a FREE assessment of your Residential or Commercial location. Call us at 330-893-3139.